A plan by New York mayor Bill de Blasio to house the city’s rising homeless population is facing opposition over a shelter that backs on to a super-luxury residential skyscraper on “Billionaires’ Row”.

According to the city’s department of homeless services, the former Park Savoy Hotel at 158 W 58th St in midtown Manhattan will house 150 homeless people. It is scheduled to open in March, and backs on to One57, a 75-storey skyscraper on 57th Street.

But the plan, part of a program to create 90 new shelters across all five New York boroughs that de Blasio says will be “in every kind of neighborhood”, is opposed by local residents who accuse the recently re-elected major of playing political games.

New York City declares a climate emergency, the first US city with more than a million residents to do so

“I think de Blasio is trying to score points,” said Helen Caputi, who was walking her dog on the corner of 58th Street and 7th Avenue. “The people here are uppity, they don’t like it. I’m for helping the homeless people, but I think they could have placed the shelter elsewhere.”

“It’s not going to be a good thing cause you’ve got the Marriott and Hyatt hotels right here,” said the super at an adjacent building. “So it looks like there’s going to be a war with de Blasio. He doesn’t have to put the homeless here, he could put them all in the armory on 2nd Avenue.”

De Blasio has previously said the city’s “Turning the Tide on Homelessness” program would include shelters in every neighborhood, as the city moved to tackle “a new kind of homelessness that is driven by years of wages not keeping up with the cost of most of the housing in our city”.

Recent figures showed more homeless people live in New York City than in any other city in the country. The city estimates that the population has been growing for 35 years, with the population now standing at 76,501 on any given night, according to the US housing department.

As part of the new effort to reduce homelessness, the city has outlined dozens of reforms including providing NYPD security, career counselling, mental health and and substance abuse disorder counselors at shelters. 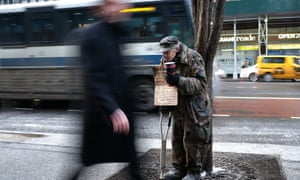 At One57, concierge services said they could not comment on the plan to convert the Savoy into a shelter. “I can tell you the residents here are not going to be happy,” a doorman remarked.

When it launched sales in 2011, the $1.5bn, 1,004ft development was promoted as setting a new standard in luxury – and pricing. The skyscraper boasted a top-floor penthouse that sold for $100.5m, or about $9,200 per sq ft, making it the priciest closed apartment sale in the city. Developer Gary Barnett once referred to the view of Central Park from the upper floors of the tower as “the money shot”.

Residents are said to include Silas Chou, backer of fashion brands including Tommy Hilfiger and Michael Kors. Business partner Lawrence Stroll, whose estimated wealth is put at $2.4bn, recently put his apartment on the market for $70m.

Stroll’s apartment, according to The Real Deal, includes a “woven suede” entrance hall and a “sculpted ceramic wall” by the artist Peter Lane in the great room. The “extravagant” pad also features a 1,500 sq ft master suite, eat-in chef’s kitchen with a hidden ceiling TV.

According to the real estate publication, property prices along Billionaires’ Row have been struggling in recent months in line with a broad downturn in the city’s priciest real estate.

Until late last year, US secretary of commerce Wilbur Ross owned a 5,573 sq ft penthouse at the Briarcliff opposite. He sold it for a $2m loss.

Trump to address anti-abortion rally March for Life, cementing his U-turn on the issue

Update: This page has been updated to include changes Xero made to its Early plan, which is geared toward very small...