Is Manufacturing Dead in Rhode Island?

Trump impeachment trial: How did Democrats’ arguments play out?

Rhode Island governor to deliver State of the State speech

Twitter Implodes Over Billie Eilish, Age 17, Not Knowing Who Van Halen Is

On the day the Boston Red Sox clinched the AL East at Yankee Stadium, longtime Sox radio voice Joe Castiglione stood in the dugout before the game, saving a thought for the team across the field.

The Sox would end the regular season a little more than a week later, with the most wins in baseball this year and the most wins by a Red Sox team in any year. The New York Yankees would finish a distant second in the American League East.

“They’re still the Yankees,” Castiglione said. “You still fear them—and our fans do, too.”

Mitch Moreland delivers as Red Sox walk off against Astros

They’re still the Yankees, and when they’re at their best, they give you every reason to fear them.

It isn’t automatic that they’ll run past the Red Sox in the American League Division Series the way they ran past the Oakland Athletics, 7-2, in Wednesday’s AL Wild Card Game. But on a night where Yankee Stadium fans amused themselves by chanting “We want Boston” repeatedly, the Yankees team on the field had every reason to believe that they can show up at Fenway Park on Friday night as more than just a worthy challenger to the 108-win Red Sox.

It’s the Yankees and Red Sox and all that entails, for the first time in the postseason since the 2004 American League Championship Series no one in either fanbase will ever forget. But it’s more than that.

While this year’s Red Sox won more games than any other Red Sox team in history, the Yankees are the best wild-card team ever.

Start with their 100 wins, the most by a wild card. Then look at the games where they had Aaron Judge in the lineup, before and after he missed 45 games with a broken bone in his hand.

With Judge in the starting lineup this season, the Yankees were 72-36, which works out to a .667 winning percentage. Prorate that over a full 162-game season and you end up with 108 wins.

When the Yankees were missing Judge, they went to Fenway at the beginning of August and were swept in four games. That basically ended the division race with nearly two months left on the schedule.

Judge is now back, and he’s doing things like what he did to the A’s Wednesday, when his two-run first-inning home run turned the Wild Card Game heavily in the Yankees’ favor almost as soon as it began. When his double began a four-run sixth inning, it sapped any remaining drama.

“After that homer, the confidence was bigger,” said starting pitcher Luis Severino, who inspired plenty of confidence himself with his four scoreless innings. “We went in after that, and it was over.” 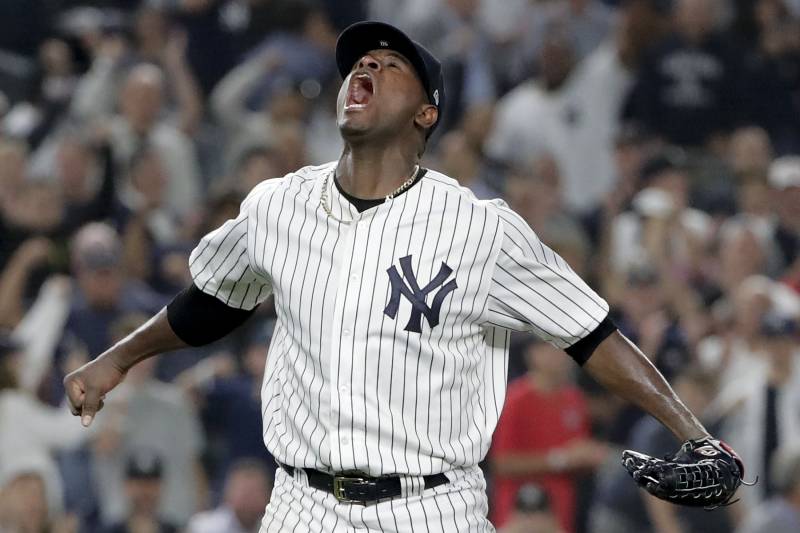 Those numbers may not mean anything when the division series begins Friday, but having Judge in the Yankee lineup means something.

“It’s not just him,” outfielder Aaron Hicks said. “We missed Didi [Gregorius] and Gary [Sanchez] for a while, too. I think it’s big that we’re going to have our full lineup.”

They have their lineup and they have their bullpen, which followed Severino on Wednesday and put the A’s away. That bullpen makes the Yankees scary, but so does that lineup when it’s at full strength.

There’s enough for the Yankees to fear in the Red Sox lineup, too. No one in the Yankees clubhouse Wednesday made any brash predictions about the way this next series is going to go.

“They’ve got a great team over there,” Judge said.

Wednesday felt more like an appetizer for that series, a warm-up act, a chance for the Yankees to show who they are. Severino threw fastball after fastball in a 10-pitch, 1-2-3 top of the first, and then Andrew McCutchen walked to start the bottom of the inning. Judge followed with his 116.1 mph, 427-foot missile to left field to make it 2-0.

That was the hardest-hit postseason home run since MLB.com’s Statcast measurements began in 2015. That record stood for only seven innings, because Giancarlo Stanton hit one even harder—estimated at 117.4 mph and 443 feet—in the eighth.

And up in Boston, the Red Sox had to understand they are about to get a meeting with the best wild-card team in MLB history.

You still fear them.

Is Manufacturing Dead in Rhode Island?

Trump impeachment trial: How did Democrats’ arguments play out?