US begins withdrawing some military equipment from Syria

Secretary of State Mike Pompeo on Monday said oil prices did not and will not influence the Trump administration’s response to the killing of Saudi dissident Jamal Khashoggi.

Pompeo’s remarks, made in an interview with CNBC’s Wilfred Frost, come three months after Saudi agents killed the Washington Post columnist in the kingdom’s consulate in Istanbul, Turkey. In November, President Donald Trump declared the United States stands with Saudi Arabia, even though the CIA has reportedly concluded that Saudi Crown Prince Mohammed bin Salman played a role in the slaying.

At the time, Trump linked his stance to Saudi Arabia’s help taming oil prices, as well as its role countering Iran in the Middle East and its pledge to buy more American-made weapons.

“Saudi Arabia, if we broke with them, I think your oil prices would go through the roof. I’ve kept them down. They’ve helped me keep them down,” Trump told reporters after issuing a statement spelling out his support for the Saudi government.

One day later, Trump thanked Saudi Arabia for taking steps to lower oil prices and implored the kingdom to push them even lower.

Oil prices getting lower. Great! Like a big Tax Cut for America and the World. Enjoy! $54, was just $82. Thank you to Saudi Arabia, but let’s go lower!

“We’ve taken a very clear message to the world with respect to the murder of Jamal Khashoggi,” Pompeo told CNBC. “This was a heinous act. It’s unacceptable. It’s inconsistent with the way nations ought to behave around the world.”

Concerned about rising gasoline costs, Trump called on Saudi Arabia and OPEC to pump more oil throughout 2018. Between June and November, Saudi Arabia sharply hiked oil production, helping to knock the cost of crude from a four-year high.

In October, oil prices plunged, with U.S. crude falling from nearly $77 to about $54 a barrel when Trump issued the statement. 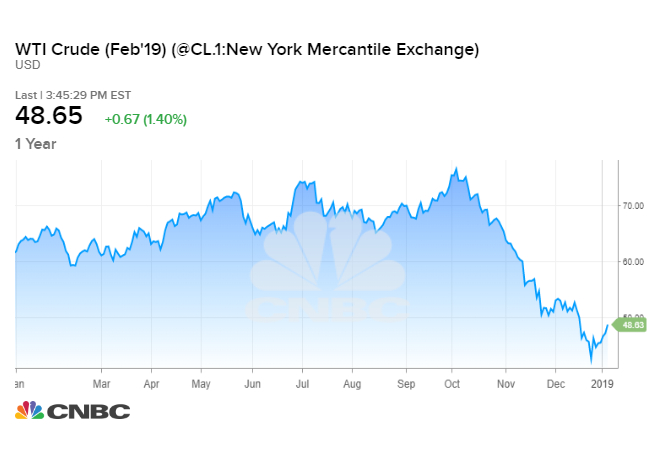 The administration’s response to Khashoggi’s killing has drawn fire from both Democrats and Republicans on Capitol Hill. Last month, the Senate voted to halt U.S. military assistance to Saudi Arabia for the war in Yemen. Senators also voted unanimously to hold Crown Prince Mohammed responsible for Khashoggi’s death.

Pompeo on Monday defended the administration’s stance, referring to its move to sanction 17 people linked to Khashoggi’s death.

“We’ve told the Saudis that we’ve held Saudi citizens accountable for the murder of Jamal Khashoggi. We will continue to do so as new facts arise,” Pompeo said.

“At the same time, we’re going to continue to do the things that protect the American people, and that includes a deep and lasting relationship with the kingdom of Saudi Arabia.”