A growing crowd of Central American migrants in southern Mexico resumed its advance toward the U.S. border on Sunday. The numbers have overwhelmed Mexican officials’ attempts to stop them at the border.

The Associated Press reports that the number of migrants has swelled to about 5,000, but an official in Mexico has put the number as high as 7,000.

The U.S. Companies Granted The Most Patents In 2018

The U.S. Is Close to a Peace Deal With the Taliban, Officials Say

With the November midterms less than three weeks away, Trump has become more vocal about the mass migration.

If the Democrats would stop being obstructionists and come together, we could write up and agree to new immigration laws in less than one hour. Look at the needless pain and suffering that they are causing. Look at the horrors taking place on the Border. Chuck & Nancy, call me!

At an election rally on Friday in Arizona, he told thousands of supporters, “Democrats want to throw your borders wide open to criminals. I want to build a wall.”

Reporter James Frederick was in southern Mexico and spoke to NPR’s Lulu Garcia-Navarro on Sunday. He observed officials stopping migrants from crossing the bridge that stretches over the Suchiate River, which is the legal crossing between Guatemala and Mexico. Mexican Federal Police, however, did not stop those migrants who crossed the river by swimming or using rafts. 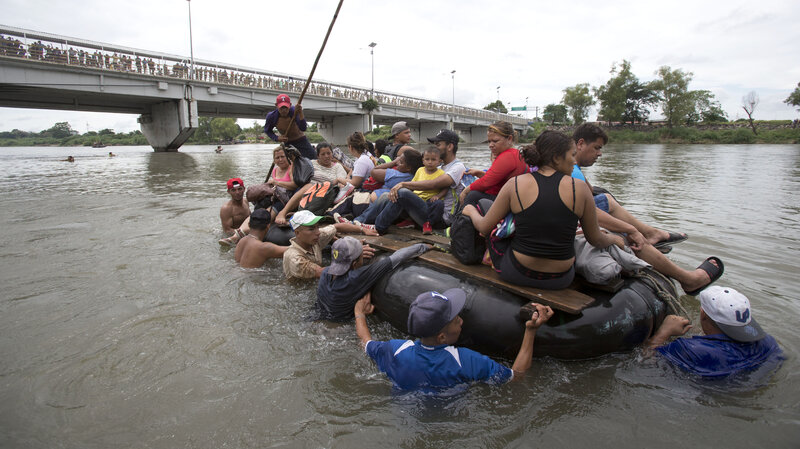 A group of Central American migrants cross the Suchiate River aboard a raft, on the the border between Guatemala and Mexico, in Ciudad Hidalgo, Mexico on Saturday. After Mexican authorities slowed access through the border bridge to a crawl, hundreds of migrants are boarding the rafts or wading across the river and crossing into Mexico illegally.
Moises Castillo/AP

Several hundred migrants already had applied for refugee status in Mexico and an estimated 1,500 were still on the Guatemalan side, hoping to enter legally.

It has not been clear where the additional travelers had gathered from, since about 2,000 had been gathered on the Mexican side on Saturday night. The number, however, may be misconstrued since people have been joining and leaving the caravan daily.

Migrants marched on through Mexico shouting slogans like “Si se pudo!” or “Yes, we could!”

Many of these migrants are fleeing poverty and violence.

At the border, a woman named Maria tells James, “It was our decision.”

“We asked for people to give us rides, we sold the little we had to come,” she added. “I’m doing this for my daughters and granddaughters.”

James tells NPR that people at the border say they’ll do whatever is asked of them, as long as they aren’t sent back to Honduras.

The decision to form a migrant caravan came after some migrants gave up trying to enter Mexico legally because the asylum application process was too slow and most consider their final destination to be the U.S., where Trump says he will close the border on them.

“They’re not coming into this country,” Trump said at the rally.

Samuel, a 40-year-old Honduran traveling with his wife and three sons, tells James that he hopes Trump will change his mind.

“I believe Trump’s heart may still be tender and one day he will feel peace and happiness and do good for us. He won’t regret it,” Samuel said.