A federally appointed task force of industry leaders has warned the Trudeau government that corporate tax cuts in the United States are hurting Canadian competitiveness, but some executives on the panel caution against a simple match of the U.S. tax package.

Members of the “resources of the future” group are calling for a 100-per-cent tax deduction in the first year for all new capital investments in advanced innovation, as well as a broader review of corporate taxes.

US judge rules Trump officials can be compelled to testify

Still hope for US-China trade deal this year: US official

Amazon sues over loss of defence deal to Microsoft

The natural resources executives warn that the recent U.S. tax cuts “have created an uneven playing field in favour of U.S. companies,” according to an advance copy of the task force reports, which were provided to The Globe and Mail.

The comment is one of many that are aimed at improving Canadian competitiveness, which Finance Minister Bill Morneau has said will be the focus of his fall fiscal update. 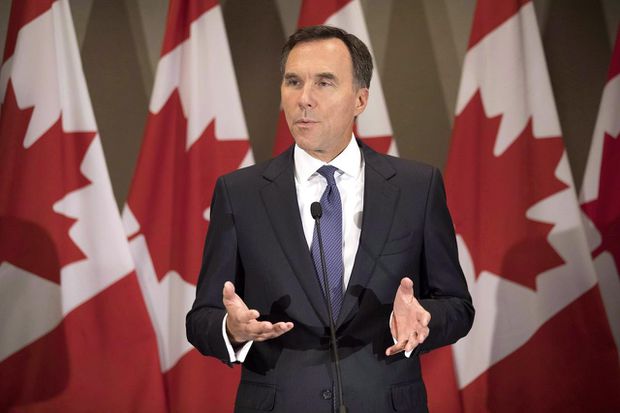 The reports do not make a specific recommendation on corporate tax rates. The recent package of business and personal income tax cuts in the United States have effectively erased Canada’s corporate tax advantage with its largest trading nation.

However, critics of such recommendations have questioned whether those tax cuts are sustainable. The United States has had a substantial increase in the size of its deficit over the past year, which is unusual during a period of strong economic growth.

Shopify founder and CEO Tobias Lutke, who headed the task force’s work on digital industries, said in an interview that Ottawa should not follow the U.S. example on taxes, which he described as “dangerous.”

The fall update has not been scheduled, but Mr. Morneau announced at the time of his February budget that the government would respond to the U.S. tax cuts after the Finance Department conducts an in-depth analysis.

Throughout the year, he and his officials have played down expectations that the government would lower Canada’s corporate tax rate, although the minister said earlier this month that no measure has been ruled out.

In addition to lower corporate tax rates, the U.S. tax cuts include immediate writeoffs for capital investments. Finance officials have signalled that Ottawa may be open to a similar measure.

The panel on digital industries, which is led by Mr. Lutke, said the Scientific Research and Experimental Development tax credit should be shifted away from startups toward companies worth more than $1-million with more than 40-per-cent year-over-year growth.

The report says this would help build large anchor companies and address the fact that almost all of Canada’s 40,000 information communications technology firms are small.

Mr. Lutke said that, unlike many other countries, federal support for IT companies tends to disappear once they reach about 24 people.

“You are actually incentivizing companies to stay small,” he said, adding that government policy should encourage the growth of Canadian firms that can become large global companies.

AGT Food and Ingredients Inc. CEO Murad Al-Katib, who chaired the agri-food section of the task force, said his advice to the government is that a competitiveness plan should look at taxes, but also issues such as attracting skilled talent and reducing delays caused by regulation.

“I think that the overall interaction of tax, business climate, skilled worker availability and encouraging investment and innovation, those are all going to be very important elements of a competitiveness framework. So taxes on their own, aren’t the only issue.”

China summons US envoys over sanctions linked to Russia deal