Top US and Chinese defense officials met in Singapore Thursday for a head-to-head meeting which nearly didn’t take place amid growing tensions between the world’s two most powerful countries.

US Secretary of Defense James Mattis and Chinese Defense Minister Wei Fenghe spoke for an hour-and-a-half behind closed doors, according to Randall Schriver, the US assistant secretary of defense for Asian and Pacific Security Affairs.

Schriver said both men spent “significant time” discussing the situation in the South China Sea, a flashpoint between the two countries.
“The (US) secretary making very clear we will continue to operate where international law allows,” Schriver told reporters.

The meeting comes amid growing economic, military and political tensions between Washington and Beijing, from the escalating trade war to allegations of Chinese political interference by US President Donald Trump.

The meeting was nearly called off once earlier in October, but was rescheduled at China’s request on October 17, and took place Thursday on the sidelines of the ASEAN forum in Singapore.

“Neither side really wants a full-blown strategic competition, disengaging, decoupling from each other,” Bonnie Glaser, director of the CSIS China Power Project in Washington, told CNN.

“(The Chinese) like the idea of having regular dialogues. It is an important way for (Chinese President) Xi Jinping to signal to his domestic population that he has a handle of the US-China relationship, that it’s not spiraling out of control.” 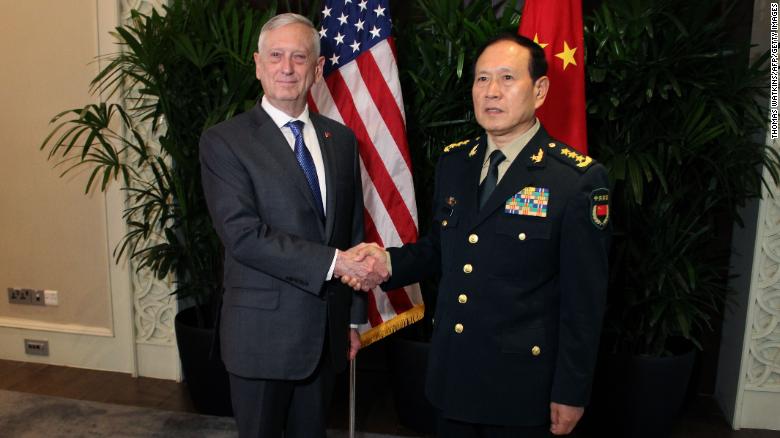 Tensions in the South China Sea

A long-running point of contention between the two countries is China’s ongoing militarization of artificial islands in the South China Sea, one of the world’s most important sea lanes.

Most countries view the Chinese government’s vast territorial claims in the sea as in direct violation of international law, but this has not stopped Beijing from building up and weaponizing islets and reefs.

To assert the international right to freedom of navigation in the South China Sea, Washington conducts regular naval operations in close proximity to Chinese-held territory in the region.

Under the Trump administration the dispute has become increasingly fraught as the Pentagon has stepped up the number and intensity of freedom of navigation operations, which China regards as provocations.
Mattis and Wei’s meeting comes just days after a pair of B-52H Stratofortress bomber planes took part in what the US Air Force called called “a routine training mission in the vicinity of the South China Sea.”

When asked about the flights Thursday, China’s Foreign Ministry said it was working to confirm the details but “firmly opposed to any country’s behavior that jeopardizes the sovereignty and safe interests of the coastal countries and disturbs the regional peace and stability with the excuse of freedom of navigation and overflight.”

“We always respect and safeguard every country’s freedom of navigation and overflight in the South China Sea in accordance with international laws,” spokesman Lu Kang said.

Last month, Washington accused a Chinese destroyer of conducting “a series of increasingly aggressive maneuvers accompanied by warnings” while the USS Decatur was sailing on a freedom of navigation mission, forcing the US ship to quickly maneuver to prevent a collision.

Mattis and Wei did not discuss the Decatur incident, Schriver said.