US President Donald Trump to visit Ireland in November

US President Donald Trump to visit Ireland in November

The US President Donald Trump will visit Ireland in November, the White House has announced.

It will be the first visit to the island by the US President since his election in 2016.

Politicians and activists have said they will be holding a protest during the visit.

Mr Trump will travel to Paris to for commemorations on November 11 marking the 100th anniversary of the armistice that ended World War I.

It is unclear if he will travel to Northern Ireland as part of the trip.

Opposition to the visit has been expressed, with the leader of the Labour Party in the Republic of Ireland, Brendan Howlin, saying Mr Trump is “no friend of democracy or human rights”.

He said his party would strongly oppose the visit.

.@realDonaldTrump has been no friend of democracy or human rights. We will always be firm friends of the American people, but Ireland will not welcome a man with Trump’s record of discrimination, sexism and lies. @Labour will join with likeminded people to oppose this visit. https://t.co/tH0KxmaPnF

The Green Party called on the Irish government to cancel President Trump’s visit.

In a tweet, party leader Eamon Ryan says he will be organising a protest and called out for others to join him.

“Help us to do so if you abhor his policies on climate change, refugee migration, trade wards, military expansion, economic inequality and the whole gung-ho, misogynistic, racially divisive show”.

You're not welcome here @realDonaldTrump

The main opposition party Fianna Fáil says the visit by the US President follows a history of welcoming previous US Presidents to Ireland.

Fianna Fáil foreign affairs spokesperson Niall Collins says the occasion gives the government the opportunity to reiterate Ireland’s position “that the need for decency, compassion, respect for international diplomacy has been been as important”.

It also emerged during Mr Varadkar’s visit to the US that he had made a call to Clare County Council when tourism minister over a proposal to build a wind farm near Trump’s golf resort.

The US President owns a golf resort in County Clare, Trump Doonbeg, which he bought in February 2014.

He last visited Doonbeg in May that year and was met off the plane by then finance minister Michael Noonan.

Mr Trump was due to visit again just a few months before the US presidential election, in the summer of 2016, but later shelved the plan.

The dates and exact itinerary of his upcoming Irish visit have not been released.

“While in Europe, the President will also visit Ireland to renew the deep and historic ties between our two nations,” the White House said in a statement.

A spokesperson for the Department of the Taoiseach (Irish prime minister) said: “The Taoiseach understands that President Trump will stop in Ireland for a brief visit on his way to or from the Armistice commemorations in Paris.

“It will be an opportunity to follow up on the issues discussed in the White House in March including migration, trade, climate change and human rights issues.”

Mr Trump spent four days in the UK in July, having cancelled an earlier trip originally planned for February.

President Trump will visit Ireland in November. The US President is always welcome in Ireland. Our two countries have such strong historic, economic, cultural and family ties. Maintaining those connections is always a top priority ??????

Taoiseach Leo Varadkar invited Mr Trump to Ireland during a meeting at the St Patrick’s Day celebrations in Washington in March.

In 2017, Mr Varadkar’s predecessor, Enda Kenny, also extended an offer for the US President to come and visit. 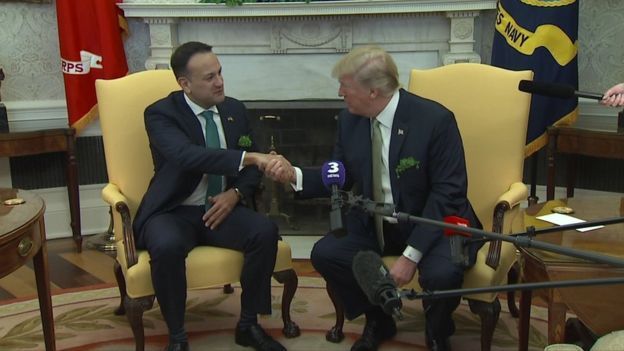 Speaking at the time, the US President said he would “love” to visit Ireland and added: “I look forward to being there. It’s a great country.”

The inauguration of the Irish President is due to take place on November 11, the date of the Armistice commemoration.