US shutdown impasse over Trump’s wall drags on

US shutdown impasse over Trump’s wall drags on

A partial US government shutdown is likely to continue into next week amid an impasse over funding for President Trump’s proposed Mexico border wall.

Both Congress chambers met for just a few minutes on Thursday but took no steps to end the closure. The House and Senate will now meet again on Monday.

Many lawmakers did not return to Washington for the sessions.

Top Six Of The World’s Most Beautiful Libraries

The State Department Just Told U.S. Diplomats to Return to Work With Pay

Dollar edges up against yen on U.S.-China trade hopes

Whether or not to fund the wall is the issue holding up the passing of a government funding budget.

Both sides now seem to accept that the dispute will continue into 2019.

The funding dispute has left hundreds of thousands of federal employees either on unpaid leave or not knowing when they will get paid.

What’s the row about?

Mr Trump says he will not compromise on his demands for funding to build a border wall between the US and Mexico to tackle illegal immigration.

He is refusing to sign a wider spending package, forcing large parts of the government to shut down.

But opposition Democrats – who take over the House of Representatives in January – and some within Mr Trump’s party, the Republicans, insist they won’t give the president the $5bn he says he needs.

Have the Democrats finally realized that we desperately need Border Security and a Wall on the Southern Border. Need to stop Drugs, Human Trafficking,Gang Members & Criminals from coming into our Country. Do the Dems realize that most of the people not getting paid are Democrats?

The president’s opponents accuse him of exaggerating the issue of immigration for political gain, and argue that there are better forms of border security than a wall.

The situation has added to concerns over the outlook for the US economy in 2019, leading the stock market on a rollercoaster ride in recent days.

Why can’t Trump get his budget passed?

His Republican Party controls both chambers of the outgoing Congress and the budget was indeed passed by the House on Thursday by 217 votes to 185.

However, he needs to find 60 votes in the 100-seat Senate, where the Republicans currently have 51, so he needs to enlist the support of Democrats there.

How is the shutdown playing out?

Nine of 15 federal departments, including State, Homeland Security, Transportation, Agriculture and Justice began partially shutting down after funding for them lapsed at midnight (05:00 GMT) last Saturday.

Hundreds of thousands of federal employees will have to work unpaid or are furloughed, a kind of temporary leave.

In practice, this means that:

The remaining 75% of the federal government is fully funded until September 2019 – so the defence, veterans affairs, labour and education departments are not affected. 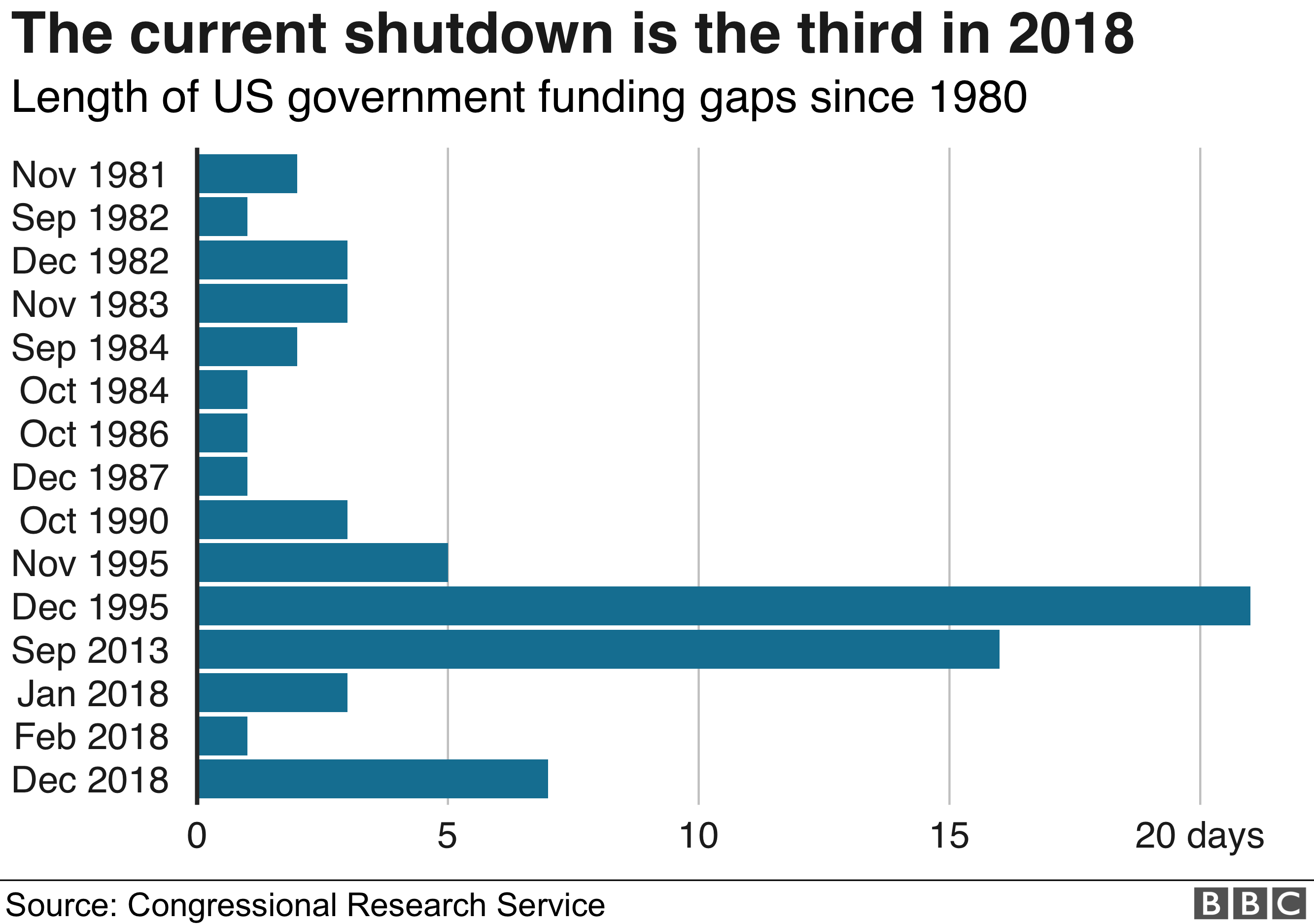